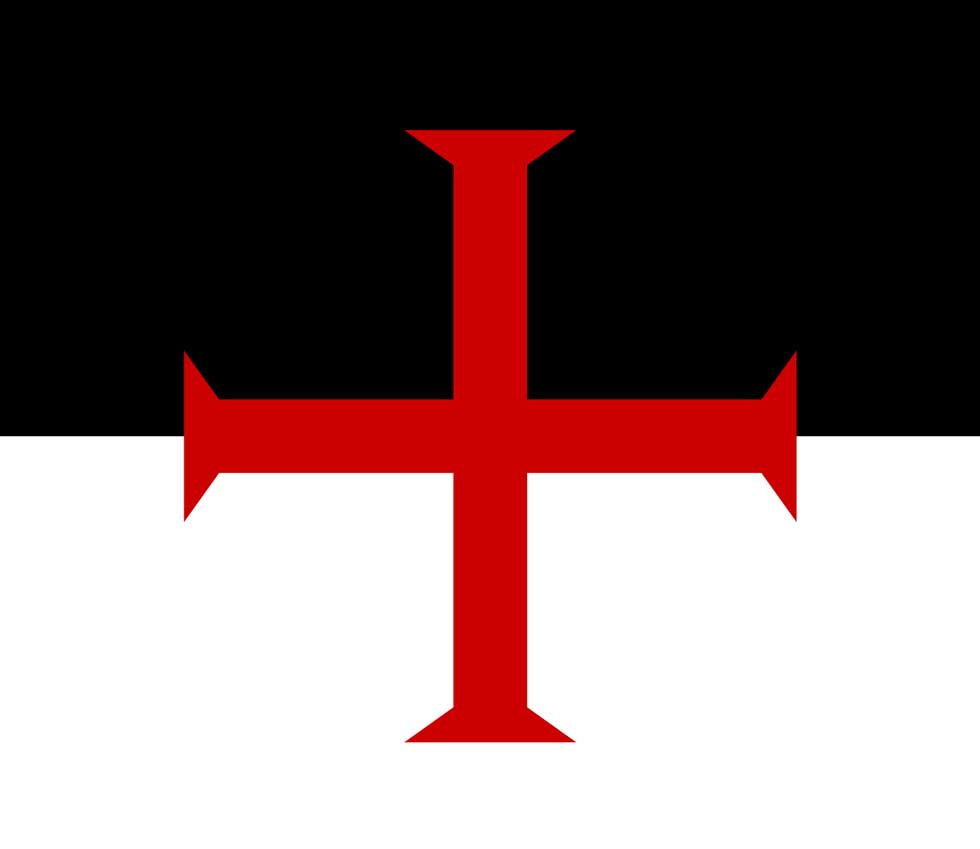 The Order of the Knights Templar grew to be one of the most powerful monastic groups in Europe in the 1100s, and it became a symbol of the fight between Christians and non-Christians. Hugh of Payens, a knight from Champagne, convinced King Baldwin I of Boulogne, whose older brother, Godfrey, had taken Jerusalem 19 years earlier, to put Payens and eight other French noblemen in a wing of the royal palace, the former mosque al-Aqsa, near where King Solomon’s Temple was said to have stood in the Holy Land.

Later, the Order was made up of three groups: the knights, who were all from noble families; the sergeants, who were from the middle class and worked as grooms and stewards; and the clerics, who were chaplains and did things other than fight. They chose the name Militia Templi, which means “Soldiers of the Temple,” and swore to protect the secrets of Christianity and Christians who were going to the holy places. St. Bernard of Clairvaux, who was in charge of the Cistercian Order, and Pope Honorius II gave the Order its power at first. In 1128, Pope Honorius II officially recognized the Templars as a separate Order. People think that the Hospitallers, who protected Catholic pilgrims in Palestine and vowed to live a life of chastity and poverty, were an inspiration for the Templars.

The Templars’ seal showed two knights riding on a single horse, which was a sign of their poverty (at least in the beginning). The design stayed the same for decades, even after the Order became one of the wealthiest of the time. The Templars were able to build up a huge amount of wealth in part because the Order was exempt from local taxes and could charge its own taxes on the community. The Templars kept their promise to be poor for the first nine years of their existence. Even their clothes came from donations from religious people. Their battle standard was a red eight-pointed cross on a black-and-white background. Their battle cry was “Vive Dieu, Saint Amour” (God Lives, Saint Love), and their motto was “Not for us, Lord, not for us, but to Thy Name give glory.”
Over the next 150 years, the Templars got a huge amount of money, property (they owned more than 7,000 estates in Europe), and power. Their headquarters were in Paris, but they had branches all over Europe and the Middle East.

Related Post  The Mystery Of The Ark Of The Covenant

This led to jealous rivalries, and during the Crusades, rumors spread that the Templars were not the good Christian knights that many people thought they were. People paid attention to their secret rituals, which their enemies said were based on their worship of Allah. Other people thought they were actually worshipping the demon Baphomet and doing horrible black magic rituals that involved sodomy, bestiality, and human sacrifice. They were also thought to hate the Pope and the Catholic Church, among other things.
In 1307, King Philip IV of France wanted to get rid of the Templars because he owed them a lot of money. He did this by spreading rumors about them. On October 13, he took over their Paris temple and arrested the Grand Master, Jacques de Molay, along with 140 other Templars. He then tortured them horribly to get them to say what they knew. Philip talked Pope Clement V into letting all Templar property be taken. At the Council of Vienne in 1312, Pope Clement got rid of the Order and gave its property to the Hospitallers in exchange for the money Philip said the Templars owed him.
If Jacques de Molay told the public about the crimes of the Order, he would spend the rest of his life in prison. Instead, he went public and said that the Order was not guilty of any of the crimes for which it was blamed. For this, he was burned at the stake. But it doesn’t look like this was the end of the Knights Templar. There have been rumors for a long time that the Templars who got away went to Scotland dressed as stonemasons and started the Freemasons. Some people have also said that a Templar named Geoffroy de Gonneville got a message from de Molay just before he died and gave it to a group of Templars who were meeting in Dalmatia. The message said that the Order would be brought back to life after 600 years. At this meeting, the Templars are said to have started the Order of the Rose-Croix, or Rosicrucians, before they broke up.