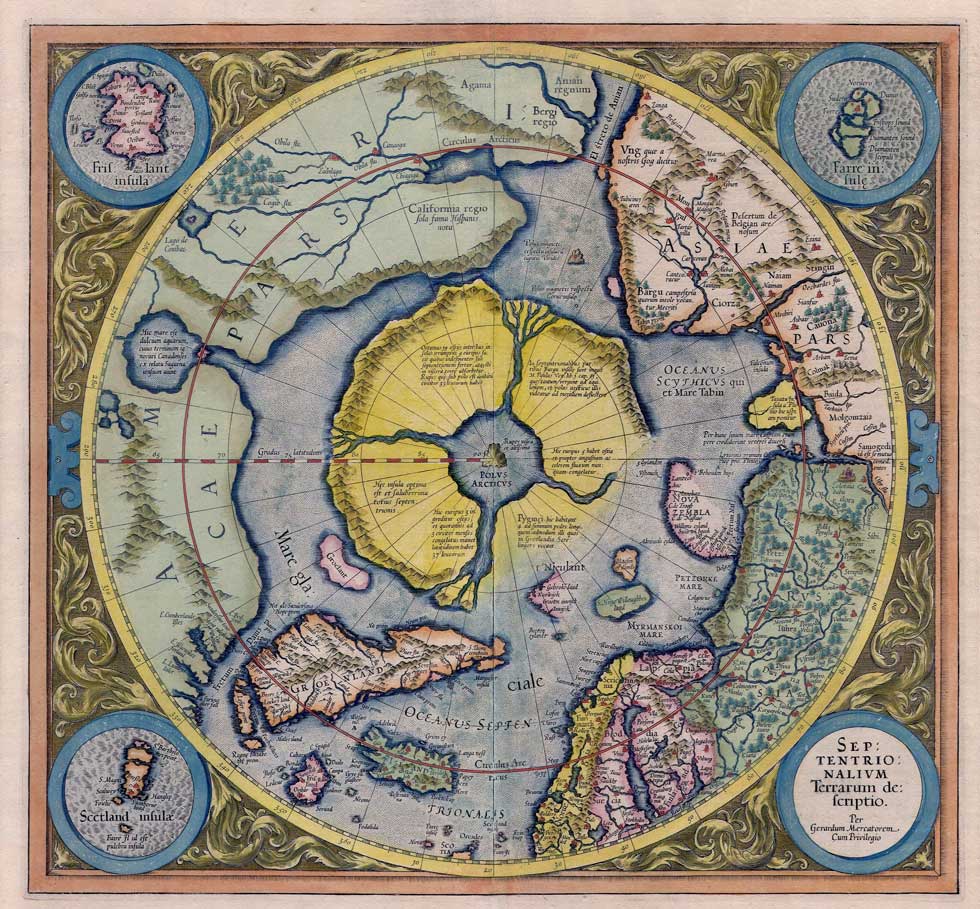 Helena Blavatsky, the great Russian occultist, had a lot to say about the nature of the lost civilizations, whose philosophy and knowledge were passed down to the great civilizations of the Middle East and Far East in a way that was often distorted. Blavatsky said that she had read a very old document called the Stanzas of Dzyan while she was in Tibet. She said that our distant ancestors lived on a number of lost continents.

She called the first of these continents “The Imperishable Sacred Land.” This was the home of both the first human and “the last divine mortal,” who lived there forever.
Hyperborea was the Second Continent. It was “the land that stretched its prongs southward and westward from the North Pole to welcome the Second Race.” It was all of what is now called Northern Asia. One of the Root Races is called the “Second Race.” Blavatsky goes on to say that the land of the Hyperboreans, which was beyond the land of Boreas, the god of snow and hurricanes who liked to sleep heavily on the chain of Mount Riphaeus, was neither an ideal country, as mythologists thought, nor a land near Scythia and the Danube. It was a real continent, a true land that had never seen winter in the past and still doesn’t have more than one night and day in a year. The Greeks said that nighttime shadows never fell on it because it was the land of the gods and Apollo, the god of lightfavorite ,’s place to live. The people who live there are his favorite priests and servants. This may seem like poeticized fiction now, but back then, it was poeticized truth.

Lemuria was the Third Continent. The zoologist P. L. Sclater called it that because he thought it was a sunken continent that stretched from Madagascar to Sri Lanka and Sumatra.
Blavatsky said that Lemuria was a huge continent that really did exist, and that its highest points are now islands in the Pacific Ocean.
Atlantis was the fourth land mass. “If ancient traditions were given more attention than they have so far, it would be the first historical land. Plato’s famous island of the same name was just a small piece of this huge continent.

Blavatsky talks about the Fifth Continent in a way that makes you think of the Earth’s land mass shifting in a big way:
The fifth continent was America, but since it’s on the other side of the world, Indo-Aryan occultists usually mean Europe and Asia Minor, which are almost as old as America. If their teaching was based on the geological and geographical order of how the continents look, then this classification would need to be changed. But since the order of the Continents is based on the order of evolution of the Races, from the first to the fifth, our Aryan Root-race, Europe must be called the fifth great Continent.

The Secret Doctrine doesn’t take into account islands and peninsulas, and it doesn’t follow how land and sea are divided today. Since the first teachings of the Secret Doctrine and the destruction of the great Atlantis, the earth has changed many times. There was a time when the delta of Egypt and northern Africa were part of Europe. This was before the Straits of Gibraltar were formed, and another event that shook the continent changed the map of Europe completely. The last big change happened about 12,000 years ago. After that, Plato’s little Atlantic island, which he called Atlantis after its parent continent, sank under the water. Blavatsky said that she had read in the Stanzas of Dzyan that there were seven great continents on Earth, but that four of them were gone, one was still there, and two more would come later. She calls them Jambu, Plaksha, Salmali, Kusa, Krauncha, Saka, and Pushkara in The Secret Doctrine. She says, “We think that each of these is not a continent in the modern sense, but that each name, from Jambu to Pushkara, refers to the geographical names given I to the dry lands that covered the whole earth during the time of a RootRace, in general to what was left of these after a geological disaster and to those places that will become new continents after future disasters.”  Blavatsky drew on a lot of religious texts, like the Hindu Puranas, which talk about a place called Svita-Dvipa (Hyperborea) or the White Island, which is where Mount Meru, the spiritual center of the world, is located.

If we believe what Hindu holy texts say about Mount Meru, like that it is 672,000 miles tall, then we must admit that the mountain does not exist anywhere on the real Earth. This has led Orientalists to think that the White Island and Mount Meru are in what could be called another dimension that takes up the same space as Earth and can be seen (and reached) by beings with a spirituality that is far enough along.

The mythical land of Hyperborea was also a big part of the writings of the French occultist Rene Guenon (1886–1951), who, like Blavatsky (whom he thought was a fraud), said that he got his information from secret sources in Asia. Blavatsky’s Hyperborea and Guenon’s Hyperborea are very similar, but Guenon’s is set much more recently. Guenon says that the current cycle of humanity began in the Hyperborean land of Tula only 64,800 years ago (Thule). Hyperborea and the later Atlantean civilization, which lasted 12,960 years (half of a precessional cycle), were the places where all of our religious and spiritual beliefs came from. Guenon also wrote about Mount Meru, but in a symbolic way: “It seems from his essays on symbology that Guenon did not think of Meru as a real mountain at the North Pole, but rather as a symbol of the earth’s axis that goes through the pole and points to the Arktoi, the constellations of the Great and Little Bears. Guenon also said that the tilt of the Earth’s axis, which is 23 1/2 degrees, was caused by the Fall of Humanity.

At this point, we should stop and think about a question that may have occurred to the reader: if the prehistoric Root Races of humanity existed, why haven’t archaeologists and palaeontologists ever found and dug up any of their remains? Aside from the obvious, but not very satisfying, answer that most of the Earth’s fossil record hasn’t been found yet, it’s important to remember that Guenon, Blavatsky, and the other Theosophists believed that the early Earth and its amazing first inhabitants were not made of solid, material things, but rather of a spiritual substance that only later became material. Because of this, no one has ever found their bodies. According to this system, Godwin gives a basic timeline of the Earth’s history. He does this by summarizing how Jean Phaure’s work built on Guenon’s. The Golden Age (Krita Yuga) was from 62,000 BC to 36,880 BC. It lasted one full precessional cycle (25,920 years) and started with the Age of Leo. Before the fall into matter, Paradise existed during this time.

The Silver Age (Treta Yuga), which lasted from 36,880 BC to 17,440 BC, came next. It lasted 19,440 years. This age lasted from the sign of Leo to the sign of Sagittarius and included the fall into matter. It was also when Hyperborea and the other continents of Lemuria and Mu started to grow. This was followed by the Bronze Age (Dvapara Yuga), which lasted from 17,440 BC to 4,480 BC, or half of one precessional cycle, and from Scorpio to Gemini. Around 10,800 BC, Atlantis fell, and its people moved to other parts of the world. During this time, the biblical Flood happened, and people learned how to write. The Iron Age (Kali Yuga) is the time between 4,480 BC and AD 2000. It lasts for 6,480 years, from Taurus to Pisces. Our own history happened during this time. The cycle is over when the Millennium and the Age of Aquarius start.

Phaure has no problem with the idea that people once lived in the Arctic, and he thinks they did so with the help of a spiritual energy source that our narrow, materialistic science doesn’t understand. He says this is true by saying that some Tibetan masters can live without much clothing in the cold Himalayas and be happy.  It’s easy to see why the German occultists and nationalists of the late 1800s and early 1900s, who hated the modern world so much, were interested in Theosophy’s main ideas, like the existence of ancient and magical civilizations and the high status of the Aryan race. Peter Levenda, a researcher, says that “Modernism in general was seen as largely an urban, sophisticated, intellectual (hence “Jewish”) phenomenon.” This meant that science, technology, the Industrial Revolution, and capitalism were all seen as part of this movement.  The Theosophists were able to combine science and mysticism in their teachings. They took Darwin’s ideas about natural selection and “survival of the fittest” and applied them to the idea of a spiritual struggle between the races of Earth, which led to the Aryan race and was an important part of the evolution of the spirit.