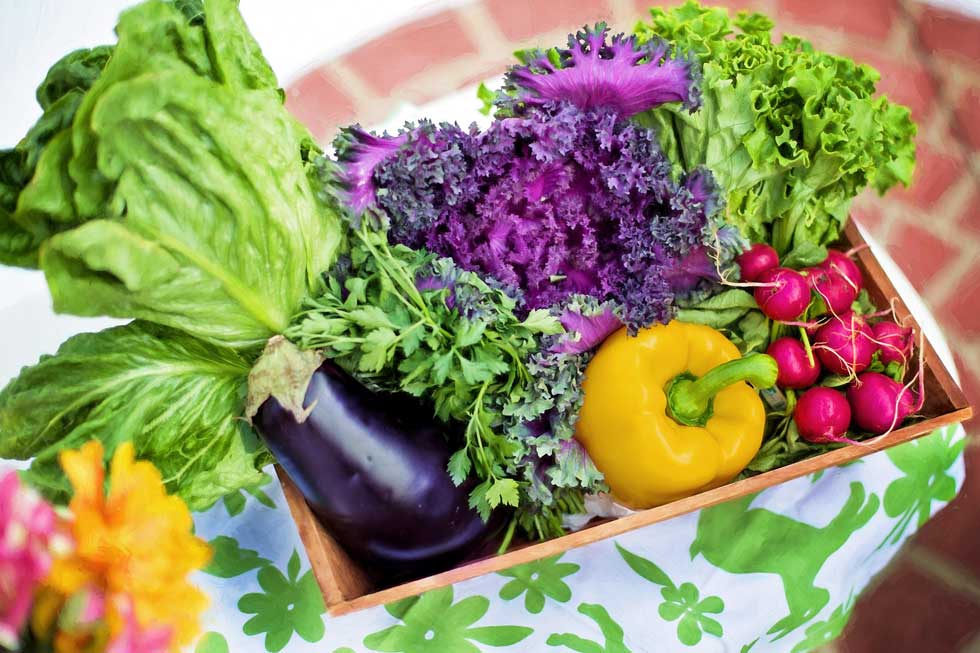 Everyone has heard of the health benefits of “eating the rainbow.” Eating grains, fruits, and vegetables of every color boosts physical and mental wellness. These meals nourish the spirit as well. They can be seen as chakra foods. Chakras, or energy centers present throughout the body, are a fundamental component of the spirit. There are seven primary chakras, beginning at the feet (Root Chakra) and ending at the crown of the skull (Crown Chakra). Each chakra has a distinct frequency and vibrating color, corresponding to a distinctive hue of the rainbow. When you concentrate on harmonizing the colors of these spiritual energy, you can achieve mental, physical, and emotional equilibrium. These energy centers can be balanced through the meals you consume. Here is a brief overview of each chakra, its function, and the importance of color in its operation.

The root chakra provides us with the vitality to live our daily lives and attain physical accomplishments.
In Sanskrit, it is called muladhara, and it is the first chakra in the human body.

“The root chakra is the starting point for everything. It is the source of genuine health, well-being, and empowerment. It is the basis upon which our physical and energy bodies and each chakra are constructed. It is thought that the root chakra is located between the perineum and the lower spine. It is sometimes associated with the adrenal glands and the anus due to its position.

These foods will assist in nourishing the chakra that grounds us to the planet. This chakra provides us with a sense of bodily steadiness. Constipation, Crohn’s disease, cold fingertips and toes, excessive urination, high blood pressure, kidney stones, and impotence may occur from an unbalanced Root Chakra.

The sacral chakra is considered to be placed where the perineum is, below the navel. It is supposed to be related to the genitalia and kidneys, however this is not substantiated by scientific evidence. It is also related with the element of water and is represented by a brilliant orange hue. It is frequently depicted with a lotus flower with six petals. Some think that Parvati, the Hindu goddess of fidelity, fertility, and power, governs this chakra. Svadhisthana is the Sanskrit term for the sacral chakra. The symbol for the sacral chakra is a crescent moon, which depicts the interaction between water tides and lunar phases. Svadihsthana means “where your being is founded” in Sanskrit.

Snyder states that the svadhisthana chakra is related with the element of water. In terms of emotions and sensuality, the water element is all about movement, adaptability, and freedom of expression. When balanced, this energy center provides direct access to flow, flexibility, and enjoyment.

These foods will help to boost your creative and sensual energies, awareness of your social surroundings and relationships with others. An imbalanced Sacral Chakra might result in menstrual issues, bladder infections, lower abdomen pain, testicular issues and irritable bowel syndrome.

The peripheral system can also be divided into multiple subsystems. The sympathetic nervous system is one example of such a system.

As a component of the sympathetic nervous system, the Solar Plexus is a vital organ. It is a collection of nerves emanating from the center of the torso. The branches of the solar plexus extend throughout the abdominal region. The term plexus, which means network, is an apt description of how attached this system is to the organs in the abdominal cavity. Between them lies a network of nerves.

The solar plexus was named for its likeness to the sun’s rays, with neurons converging at its center.

These foods increases the power center, an understanding of the self in the universe and all emotions. An imbalanced Solar Plexus Chakra might result in poor digestion, liver or kidney issues, weight problems, ulcers, diabetes and gallstones.

The location of the fourth chakra, known as anahata, is the heart. If it becomes clogged or congested, it may be difficult to build and maintain good relationships. Consequently, what are the indications of a clogged heart chakra? How do you proceed to unblock it?
In Sanskrit, “anahata” denotes uninjured, unstruck and unbeaten. It is the fourth main chakra and our core of self- and other-love, compassion, empathetic understanding, and forgiveness. The anahata chakra corresponds to unconditional love, compassion, and happiness. It is the source of great truths that cannot be articulated through language. According to yoga instructor Stephanie Snyder, Anahata is a bridge between the lower and upper chakras that integrates the manifest with the spiritual.

Snyder states that anahata is related with the element air. (The first chakra is earth, which is stable and grounded; the second chakra is water, which brings fruitful creation; and the third chakra is the “fire in the belly” necessary to translate this stable creativity into good action.) Air disperses and combines spiritual comprehension of love, compassion, and connectedness with all things encountered. Air, like love, permeates and surrounds us. We can embody this element by maintaining an open heart center and free-flowing love.

When the heart chakra is balanced, you will feel surrounded by love, compassion, and joy, as well as connected to the world. You will feel receptive to all of life’s experiences, and you will experience obstacles, particularly in relationships, flowing through you and being addressed with ease. A heart chakra that is open enables us to perceive all the beauty and love around us and to establish a genuine connection with ourselves, our loved ones, and the natural world. This chakra also helps direct love back to ourselves so that we may genuinely accept and adore our bodies and self.

These nutritious foods will connect you to unconditional love and balance your whole being. The Heart Chakra unifies all of the chakras with openness and calmness. An imbalanced Heart Chakra might result in heart palpitations, chest pain, poor circulation and low or high blood pressure.

The vishuddha or throat chakra is the communication centre of the body. It is the place where you find your voice, express your truth, and sing your praises—for yourself and others. This chakra is related with communication and self-expression, as well as hearing and being heard. The vishuddha chakra is philosophically connected with truth, clarity, and responsibility.

The vishuddha chakra relates to the throat, as well as the tongue, lips, cheeks, mouth, and ears, as well as the rear and lower portion of the neck, and even the shoulders. The shoulder girdle, the neck up to the chin, and the cervical spine to the base of the skull comprise its sphere of effect.

Throat chakra Foods include Blueberries and blackberries. They will help support self-expression and the ability to communicate with others. An imbalanced Throat Chakra might result in thyroid issues, anorexia nervosa, asthma, hearing problems and sore throats.

The sixth of the seven major chakras, the third eye chakra, also known as the brow chakra, is positioned in the center of the forehead. It influences spiritual communication, consciousness, and perception with its feminine energy. The lotus flower and the inverted triangle are two of the symbols linked with the third eye chakra’s wisdom.

Chakra is an energy wheel that extends from the base of the spine to the crown of the skull. In the 1880s, tantric yoga traditions brought concepts of the seven chakras to the Western world, where they are increasingly researched and practiced due to their numerous advantages. India was the birthplace of the Chakra system between 1500 and 500 BCE. The first text to introduce the seven chakras is the Vedas.

The sixth chakra is vital to the functioning of the chakra system. It is placed between the two physical eyes and, when opened, extends to the middle of the forehead. The third eye chakra is associated with the pituitary gland, which is responsible for serotonin regulation. When this inner eye is open, it can improve a person’s spiritual connection by supplying them with wisdom, understanding, and insight. Buddhists consider the third eye chakra to be “the eye of consciousness.”

It pertains to one’s psychic talents and is a highly spiritual chakra. An individual with a balanced third eye chakra has a sixth sense or great intuition. These psychic abilities or inner guidance can assist real-world experiences by allowing individuals to trust their instincts and inner voice. This talent enables individuals to experience the physical world with inner wisdom and illumination.

At the base of the spine, vitality remains dormant until activated by wellness activities such as meditation, asanas, and prayer. Individuals frequently report heightened mental acuity, spiritual sensitivity, and a greater level of consciousness. Healing activities contribute to insight and strength.

They will support your connection to a higher state of consciousness, imagination, intuition and spiritual self. An imbalanced Third-Eye Chakra might result in migraines, earaches, equilibrium dysfunction, deafness, blindness, sinus infections and visual defects.

The seventh chakra is an integral component of the chakra energy system. The chakra encompasses the crown of your skull and represents global consciousness. It affects brain processes such as intelligence, concentration, and memory. When a person’s crown chakras are activated, they often experience spiritual development, limitless wisdom, and heightened consciousness. People get a sense of unity, power, and self-awareness by deepening their connection to their spirit or soul.

The enlightened wisdom and spiritual strength facilitate a greater comprehension of the physical reality. This can foster a positive view on life and aid in overcoming day-to-day problems.

Life-force At the base of the spine, energy is latent unless wellness activities, such as meditation and crown chakra yoga poses, awaken it. When energy flows freely through the body, people frequently sense enhanced mental clarity, spirituality, and connection to their higher selves.

All these foods help to balance the Crown Chakra, which connects you to the spirit and provides deep wisdom. An imbalanced Crown Chakra might result in muscular disease, exhaustion and sensitivity to light and sound.

Incorporating foods of all colors into your diet can support physical, mental and spiritual well-being. The next time you’re at the farmers market—or a salad bar—invite all shades of the rainbow onto your plate.