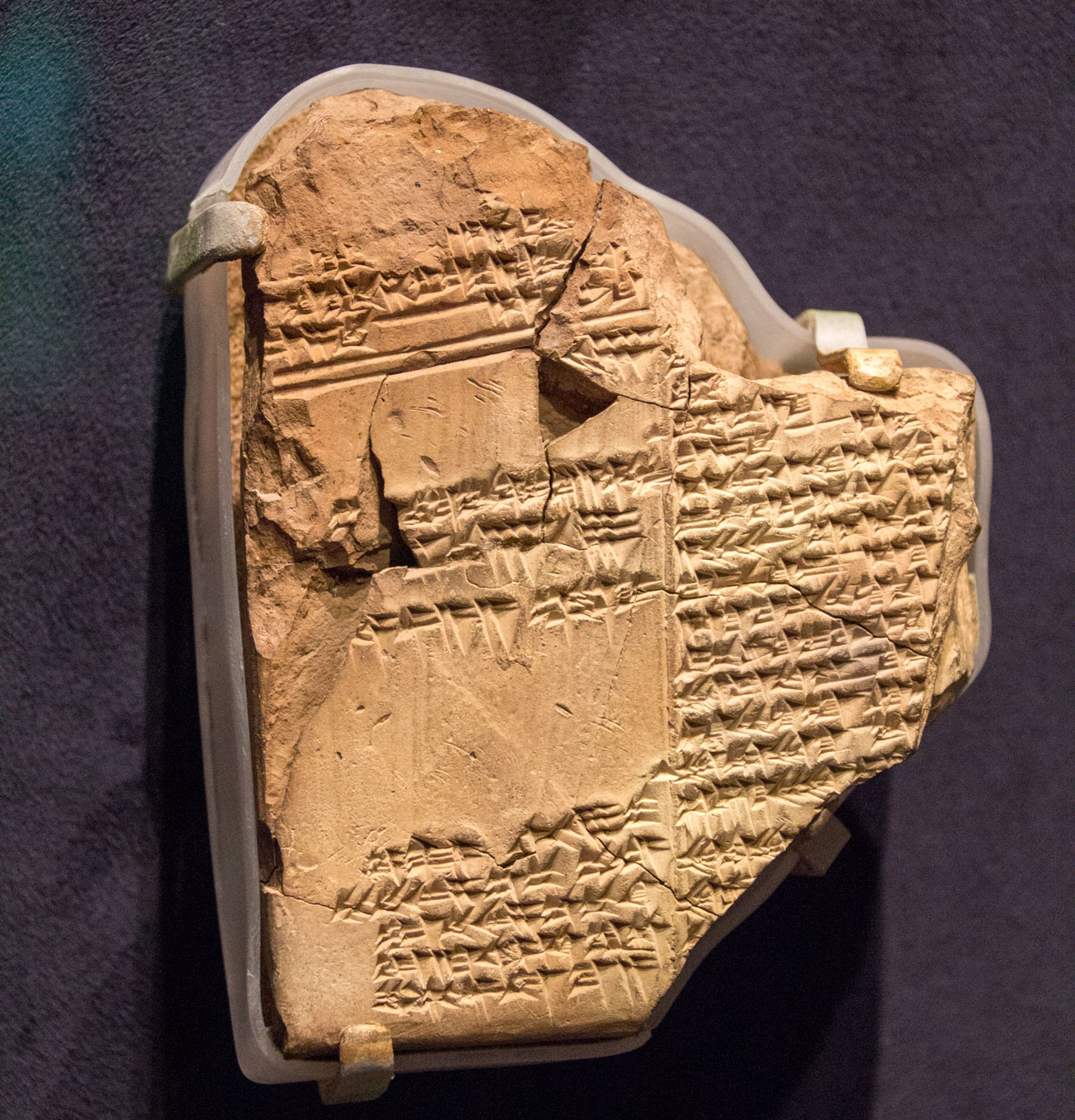 The Atrahasis is an Akkadian/Babylonian epic about the gods sending the Great Flood to wipe out humanity. Only Atrahasis (whose name means “very wise”) was informed of the impending flood by the god Enki (also known as Ea), who told him to build an ark to preserve himself. Atrahasis heeded the god’s directions, loading two of each animal type into the ark, and thereby preserving life on Earth.

The Atrahasis was written in the mid-17th century BCE, and the colophon dates it to the reign of Babylonian King Hammurabi’s great-grandson, Ammi-Saduqa (1646-1626 BCE), however the story itself is considerably earlier, having been passed down through oral transmission. The Sumerian Flood Story (also known as the ‘Eridu Genesis’) is older (about 2300 BCE), and Tablet XI of The Epic of Gilgamesh, which also includes the story of the Great Flood, is even earlier.

The Gilgamesh Epic was composed in 2150-1400 BCE, although the Sumerian Flood myth it recounts is older, having been passed down orally until it was written down. While the narrative itself is about a worldwide flood (frightening even the gods who released it), most academics agree that it was most likely inspired by a local event: floods caused by the Tigris and Euphrates rivers bursting their banks.

While archaeological and geological evidence suggests that such flooding was quite common, it is thought that the myth was inspired by a particularly memorable deluge that occurred around 2800 BCE. No well-known researcher now believes there was ever a global flood like Atrahasis and the other narratives indicate (including the story of Noah and his Ark in the Biblical book of Genesis). Stephanie Dalley, a Mesopotamian scholar, writes:

There are no flood deposits in third-millennium layers, ruling out Archbishop Ussher’s date of 2349 BC for the Flood, which was estimated by taking Genesis numbers at face value and ignoring how extremely schematic Biblical chronology is for such early dates. (5)

Dalley refers to Archbishop James Ussher (l. 1581-1656 CE), who is best known for his Ussher Chronology, which dates the start of the world to October 22, 4004 at 6:00 p.m. based on biblical occurrences. Although Christians who believe in the Young Earth Theory of the age of the earth still hold Ussher’s Chronology in high regard, his work has been disproven by solid evidence in a variety of disciplines since the 19th century CE.

After the creation of the earth but before the arrival of humans, the Atrahasis begins:

When the gods bore the burdens instead of man doing the task
The god’s burden was too large, the labor was too difficult, and the trouble was too severe.

The elder gods forced the younger gods to do all of the work on the earth, and after digging the river beds for the Tigris and Euphrates, the younger gods rebelled. Enki, the deity of knowledge, proposes that the immortals construct something new, human beings, to take over the labor from the gods. We-Ilu (also known as Ilawela or Geshtu/Geshtu-e), a god who is known as “a god with sense,” offers himself as a sacrifice to this effort and is murdered. Nintu (the mother goddess, also known as Ninhursag) imbues clay with his flesh, blood, and intelligence, resulting in the creation of seven male and female human beings.

The gods appreciate the pleasure that human workers provide them at first, but eventually the humans become too loud and disrupt the gods’ repose. Enlil, the gods’ king, is particularly irritated by the constant disruption from below, so he plans to reduce the population by sending a drought, plague, and finally starvation down upon the earth.

Following each of these plagues, humans turn to Enki, the god who created them, for advice on how to end their suffering and restore the earth to its natural, productive state. Finally, Enlil has seen enough and convinces the other gods to join him in delivering a cataclysmic flood to Earth that would entirely wipe off humanity.

Enki takes pity on his servant, the wise and kind Atrahasis, and informs him of the impending deluge, instructing him to construct an ark and confine two of each type of animal inside. The flood begins when Atrahasis obeys the command:

Nintu, the mother goddess, weeps for her children’s deaths (“she was sated with anguish, she yearned for beer in vain”), and the other gods join her in her mourning.

After the seas have subsided, Enlil and the other gods recognize their error and regret what they’ve done, but they know there’s nothing they can do about it. Atrahasis emerges from his ark at this point and offers a sacrifice to the gods. Enlil is outraged at Enki for allowing anyone to survive, despite only moments ago wishing he hadn’t annihilated humanity.

Enki addresses the assembly, the gods descend to feast on Atrahasis’ sacrifice, and Enki then recommends a fresh solution to the problem of human overpopulation: make new animals that are not as fruitful as the previous ones. It has been decreed that from now on, there will be women who are unable to bear children, demons who will kidnap newborns and cause miscarriages, and women committed to the gods who must remain virgins. Atrahasis is whisked away to heaven, where he will live apart from the new human beings created by Nintu.