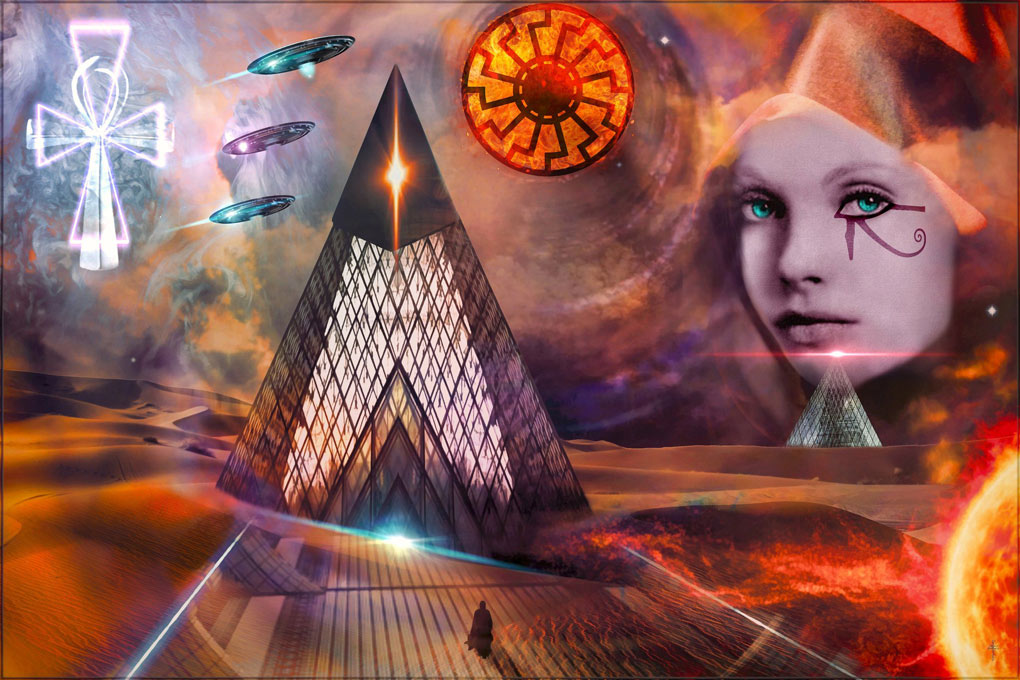 Maria Orsitsch, sometimes known as Maria Orsic, was a well-known medium who subsequently became the leader of the Vril Society.
She was born in the city of Vienna (Austria). Her father was a Zagreb native, and her mother was a Vienna native. Maria quickly became involved in the popular German national movement of the moment, which aimed to annex Austria to the German Reich.
In Vienna’s Schopenhauer cafè in 1917, occultist Karl Haushofer, Baron Rudolf von Sebottendorf, WWI ace pilot Lothar Waiz, bishop Gernot of the secret “Societas Templi Marcioni” (The Inheritors of the Knights Templar), and Maria Orsic, a transcendental medium from Zagreb met.
They’d all studied the Golden Dawn, its teachings, rituals, and, in particular, its understanding of Asian secret lodges, in depth. Sebottendorf and Haushofer were seasoned travelers who had been deeply inspired by the teachings and stories of India and Tibet. Karl Haushofer had formed relations with the Tibetan Yellow Hats, one of Asia’s most powerful secret societies, during the First World War (dGe-lugs-pa). Contacts between Haushofer and the Yellow Hats resulted in the establishment of Tibetan colonies in Germany in the 1920s.
The four young people wanted to discover something about the Knights Templar’s hidden revelatory books as well as the secret society Die Herren vom schwarzen Stein during their rendezvous in Vienna (The Lords of the Black Stone). Prelate Gernot was a member of the Knights Templar’s Inheritors, the only authentic Templar order. They are descended from the 1307 Templars, who passed down their secrets from father to son till today. Prelate Gernot is said to have informed them of the coming of a new epoch, the transition from the Age of Pisces to the Age of Aquarius.

In December 1919, members of Thule, Vril, and DHvSS (Die Herren vom schwarzen Stein – The Lords of the Black Stone) hired a tiny forester’s lodge outside Berchtesgaden (Germany) and met there with Maria Orsic and another medium known only as Sigrun. Maria claimed to have received mediumistic transmissions including technical data for the development of a flying aircraft in a secret German Templar script – a language she didn’t understand. These telepathic messages originated in Aldebaran, a solar system 68 light-years away in the constellation Taurus, according to Vril records.
She had two stacks of papers: one with Templar script and the other with readable writing. Maria anticipated that the second pile would be written in an old eastern tongue, and that she would be able to enlist the help of the “Panbabylonists,” a Thule society-related group that included Hugo Winckler, Peter Jensen, Friedrich Delitzsch, and others. The ostensibly mysterious language turned out to be old Summerian, and hence the language of the ancient Babylonian cultural builders. The Vril Gesellschaft’s Sigrun assisted in translating the language and deciphering the unusual mental visions of a circular flight machine.
During this period and the years that followed, the concept of other science (sometimes known as alternative science or hidden science) developed. It took three years for the flying machine project to start taking shape due to financial challenges. By 1922, parts for the machine were arriving on their own, paid for in full by Thule and Vril, from diverse industrial sources.

Maria quickly became involved in the post-World War I German national movement, whose major purpose was to merge Austria and Germany. Maria married in 1919 and relocated to München with her fiance. Maria became acquainted with the Thule Gesellschaft in Munich, and soon formed her own group, the “Alldeutsche Gesellschaft für Metaphysik,” with Traute A. from Munich and several other friends: the “Alldeutsche Gesellschaft für Metaphysik,” the official name of the Vril Gesellschaft. They were all young ladies, who, among other things, were opposed to the emerging trend of women’s short hairstyles. Maria and Traute were both lovely females with long hair; Maria’s was blond, while Traute’s was brown. They wore their hair in long horse tails, which was a rather unusual hairdo at the time. This became a distinguishing feature of all the women who joined Vril, and it lasted until May 1945. They thought their long hair served as cosmic antennas, allowing them to communicate with aliens from beyond. However, they rarely wore their hair in a horse tail manner in public. Vril members (also known as Vrilerinnen) wore a disk that represented the two mediums: Marija Ori and Sigrun, as a means of identification.

Creation of the Vril society

The Vril Society was started by a group of female psychic mediums led by Zagreb’s Maria Orsitsch (Orsic), who had received communication from Aryan aliens on Alpha Cen Tauri in the Aldebaran system. According to legend, these extraterrestrials came to Earth and settled in Sumeria, and the word Vril was derived from the Sumerian word “Vri-Il” (“like god or God-like”). A second medium went by the name Sigrun, which is etymologically related to Sigrune, a Valkyrie and one of Wotan’s nine daughters according to Norse mythology.

Maria Orsitsch paid Rudolf Hess a visit in his Munich residence in late November 1924, together with Rudolf von Sebottendorf, the founder of the Thule Gesellschaft. Dietrich Eckart had died a year ago, and Sebottendorf wished to contact him. Eckert was a member of the Thule Gesellschaft and had translated Ibsen’s plays into German. He also published the periodical Auf good Deutsch. Sebottendorff and other Thulists (including Ernst Schulte-Strathauss) clasped hands around a black-draped table to make touch with Eckart. Maria Orsic’s eyeballs were rolling back and only showing whites, and she was leaning backward in her chair, mouth open, which Hess found unsettling. Sebottendorff, on the other hand, beamed with delight when Eckart’s voice began to emerge from the medium. Eckart stated that he was obligated to allow another person’s voice to get through with a critical message. The Sumi, inhabitants of a faraway world orbiting the star Aldebaran in the constellation Taurus the Bull, identified themselves with a strange voice. Hess and Schulte-Strathaus exchanged surprised glances. The Sumi were a humanoid race that briefly invaded Earth 500 million years ago, according to the voice. They erected the ruins of ancient Larsa, Shurrupak, and Nippur in Iraq. The ancestors of the Aryan race were those who survived the great flood of Utnapishtim (the Deluge of Noah’s Ark). Sebottendorff was doubtful and demanded proof. Maria wrote numerous lines of queer-looking marks while remaining in a trance. Summerian characters, the language of the founders of the early Babylonian society, were discovered to be such signs. The letters may have been enough to persuade Sebottendorff, but most Columbus Ohio criminal lawyers would label it circumstantial evidence at best.

Aldebaran’s solar system is 68 light-years away from Earth, and the Realm of Sumeran consists of two habitable planets orbiting their sun. The people of this solar system are separated into three groups: masters, White God-like humans (Aryans), and other human races. These arose as a result of climate variations on individual planets, and were the outcome of the God-like people’s degeneration. These mutants developed spiritually at a slower rate than God-like people. The more races were mingled together, the lower their spiritual development became. As a result, as the sun (Aldebaran) began to expand, they were no longer able to perform interplanetary travels like their forefathers; leaving their planets had become impossible. As a result, the lower races, who were completely reliant on the masters, were evacuated in spaceships and sent to other habitable planets. Despite their differences, these two races had mutual respect and did not trespass on each other’s dwelling area (in contrast to Earth).
Following the growth of the Aldebaran sun and the increasing heat that resulted from it, the masters’ race, the White God-like people, began colonizing other worlds comparable to Earth 500 million years ago, making the planets uninhabitable. They were supposed to have populated the planet Mallona (also known as Maldek, Marduk, or Phaeton by the Russians) in our solar system, which was located between Mars and Jupiter at the time and is now home to asteroids. Then there’s Mars, where the huge pyramid cities and the well-known Martian face, photographed by the Viking mission in 1976, attest to the people’ high degree of development. It was assumed that the God-like people of Sumeran Aldebaran arrived on Earth for the first time at that period. The presence of a trilobite petrified combined with the sole of a 500 million-year-old petrified shoe bears testament to this. That prehistoric fish existed on Earth at the time and vanished 400 million years ago.

Simply put, the construction drawings and technical data received by the telepaths – regardless of origin – were so perfect that the most incredible notion ever envisioned by man arose: the development of a vehicle for flight to the beyond! The idea of a “alternative science” grew in popularity (today one would use the term “alternative forms of energy”). It took three years for the project to get started. Dr. W. O. Schumann, a member of the Thule and Vril Societies, presented a lecture at the Faculty of Science in Munich during the initial phase of a “other technology” or “other science.”

These telepathic messages originated in Aldebaran, a solar system 68 light-years away in the constellation Taurus, according to Vril records. She had two stacks of papers: one with Templar script and the other with readable writing. Maria anticipated that the second pile would be written in an ancient eastern language, and that she would be able to enlist the help of the Panbabylonists, a Thule society-related group that included Hugo Winckler, Peter Jensen, Friedrich Delitzsch, and others. The ostensibly mysterious language turned out to be old Summerian, and hence the language of the ancient Babylonian cultural builders. The Vril Gesellschaft’s Sigrun assisted in translating the language and deciphering the unusual mental visions of a circular flight machine.

Maria Orsitsch was the initiator of the ‘All German Society for Metaphysics’ (Alldeutsche Gesellschaft fr Metaphysik), a female circle of mediums who were involved in alien telepathic communication in the early twentieth century. The Vril Society, or ‘Society of Vrilerinnen Women,’ was eventually renamed. With her female Vril circle, Maria Orsitsch is reported to have made contact with extraterrestrials from Aldebaran in 1917. Later that year, in a small forester’s lodge outside Berchtesgaden, the Vril circle met with other groups to explore a possible voyage to Aldebaran to meet the Aliens by building Nazi ufos. Notes on this space mission are explored in Black Sun: Aryan Cults, Esoteric Nazism, and the Politics of Identity,’ a recent extensive investigation of Nazi Occultism.
‘Maria has received technical data for the development of a flying aircraft via medium broadcasts in a secret German Templar script – a language unfamiliar to her. These telepathic messages originated in Aldebaran, a solar system 68 light-years away in the constellation Taurus, according to Vril records.

Maria and Sigrun attended a gathering sponsored by Vril in the beach resort of Kolberg in December 1943. The meeting’s main goal was to discuss the “Aldebaran project.” The Vril mediums had received detailed information about the habitable planets orbiting Aldebaran’s sun, and they were eager to organize a trip there. On the 22nd of January 1944, Hitler, Himmler, Dr. W. Schumann (professor of the Technical University of Munich), and Kunkel of the Vril Gesellschaft met to discuss the concept once more. The VRIL-7 large-capacity vessel was to be sent to Aldebaran using a dimension channel independent of the speed of light. A first test flight in the dimension channel, according to N. Ratthofer (writer), took occurred in late 1944. The test flight nearly ended in disaster because the Vril 7 appeared “as if it had been flying for a hundred years” after the mission. Its exterior skin appeared to be wrinkled and damaged in various spots.
In 1945, Maria Orsic vanished. On March 11th, 1945, the Vril Gesellschaft distributed an internal document to all of its members, a letter authored by Maria Orsic. “No one remains here,” the letter concludes. Vril’s final announcement was this, and Maria and the other members haven’t been heard from since. It’s thought they made their way to Aldebaran.