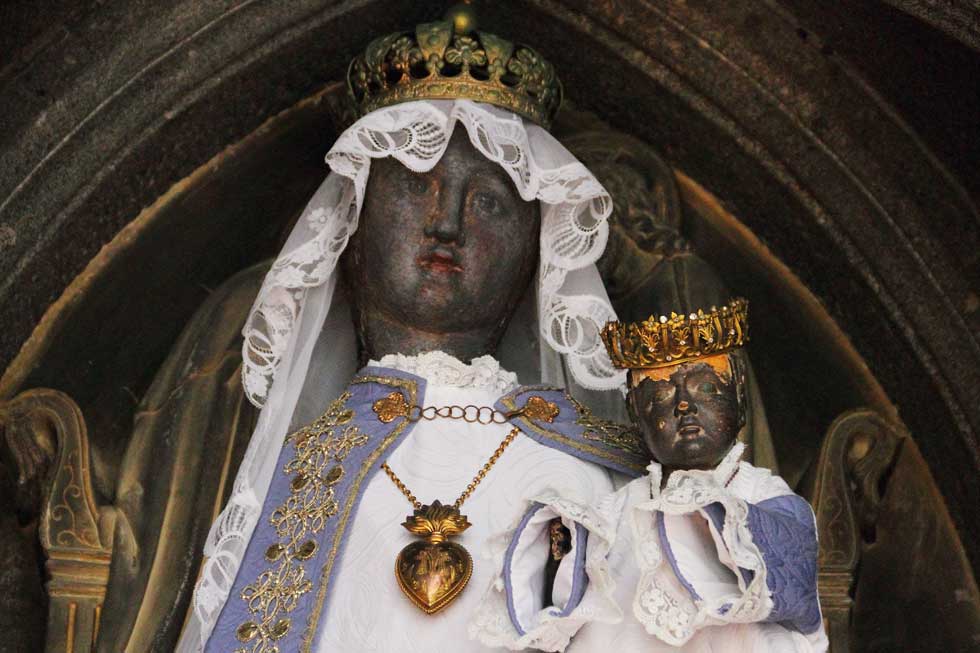 The mythical figure of Sarah should be thought of in the same way as folk beliefs about fairies. The Black Sarah One is what folklore calls a “Saracen,” which is not an Arab woman but a Cthonian, fairy-like creature similar to those who live in fountains, springs, forests, caves, and other underground places that are thought to be connected to the Otherworld.
Mistral’s Mireille  is a perfect description of the cthonic site where the cult of Sarah is celebrated.
Already, the great saints she saw the blond church in the far away lapping sea growing like a ship heading for shore…. In the top part of the church, there are three altars and three chapels built on top of each other with living stone blocks. In the underground chapel, the brunette hippies worship Saint Sarah. The one who sits on top of the other holds the altar to God.

On the pillars of the sanctuary, the narrow mortuary chapel of the Maries lifts its vault into heaven with its relics, which are holy gifts from which grace flows like rain. The tops of the cypress shrines are locked with four keys.
They are opened once every 100 years. Blessed, blessed is the one who can see and touch them when they are opened! Good weather will have its bark, and a good star will shine over it. The young trees that grow from his roots will have baskets of fruit, and his soul will always have good luck because he believed in it.
Strabo’s Geography, Book 4, says that the people of Marseilles built a temple to Diana of Ephesus on the coast of the Camargue. Could Sarah the Black One be an Eastern version of Diana of Ephesus? This is not likely at all. She is worshiped in an underground chapel, just like the Black Madonna in the cathedral of Chartres. This makes her more like the fairies who lived in caves and other wild places in Celtic mythology.

Related Post  Are The Origins Of The Bible Based On Paganism?

The Boueno Mero Negro, a Black Madonna, was worshipped in the crypt of Saint Victor in Marseilles starting in the 10th century. During Candlemas, people carrying green wax candles come to see this blackened Madonna. People say that if these candles are kept in good shape all year, they will keep lightning from striking the house. During the Feast of Assumption on August 15, which is in the middle of the dog days, the same kind of procession takes place with regular candles. This was done again to get rid of the threat of storms.
The Black Madonna of Montserrat in Spain or that of Rocamadour in the Lot region of France is worshiped in a way that mixes pagan and Christian beliefs. The wild woman, who is sometimes called Sarassine, and the Black Madonna were once thought to be the same person.
47 As it turns out, French folklore has a lot of stories about Saracens and Sarrasines. Because they are said to have left marks in places that the Arab invasions never reached, we have to accept that they are mythical creatures and not real people from the East. So, on the level of medieval fantasy, we have to tell the difference between the Saracen, who is like fairies and revenants from stories, and the Muslim, whose history is very different. In fact, when Middle Ages literature talks about Arab civilization, it is usually in the form of a mythical and completely made-up world that has nothing to do with real history or society. In this situation, both male and female Saracens are first and foremost beings from the Otherworld who belong to the dark world of ghosts. Sarah and all the other Black Madonnas are proof that this being lives on in Christianity.