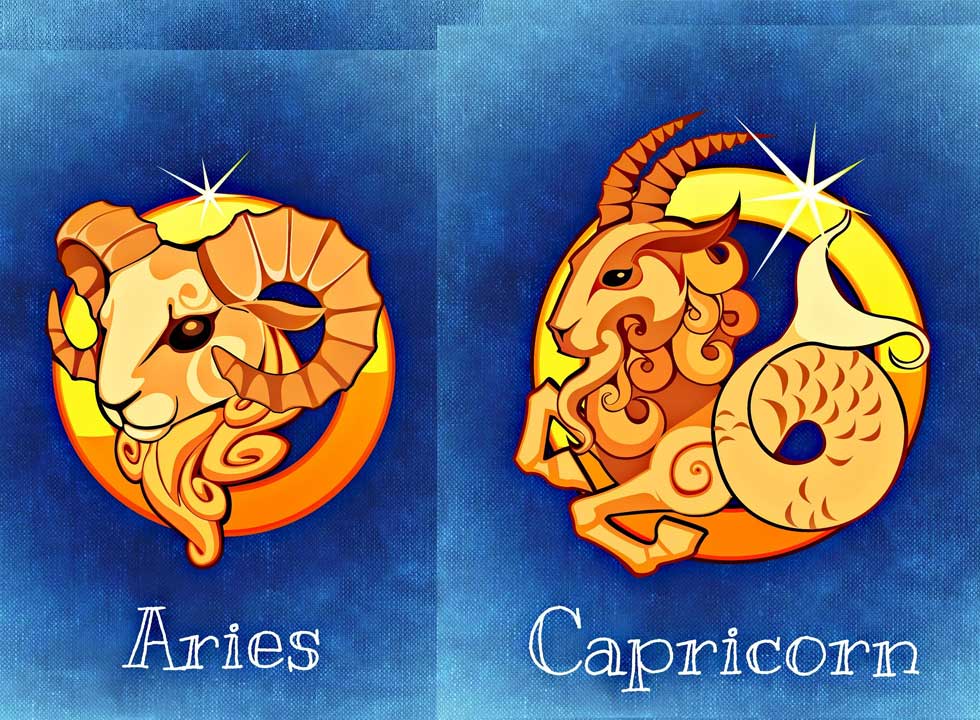 Aries and Capricorn compatibility for building trust and communication

Since they are both extreme individuals and “all or nothing” types, it will be simple for them to develop mutual trust. Even if they have profound miscommunications in other aspects of their relationship, they rarely breach each other’s trust. However, they will take this for granted because, while they are together, they appear to lose consciousness of the things that should be cherished between them. Periodically, one of them should remind the other of the qualities that comprise their relationship.

Because Capricorn exalts Mars, the ruler of Aries, they should focus their conversation on career aspirations, professional successes, and physical activity. Aside from that, they have little to discuss.

Rarely will a Capricorn partner permit their impulsive and, from their perspective, even dumb Aries spouse to hold and cherish their own thoughts as valuable or practical. Although they will undoubtedly respect their initiative and degree of enthusiasm, the rest of Aries’ behavior is generally inappropriate. Since Capricorn is grounded and able to assess the issue objectively, they will maintain a level-headed perspective regarding their partner’s lack of tact and endurance or even their idiocy. You can understand how frustrating this may be for an Aries, especially when you consider their intense desire to establish clear boundaries and be respected in every aspect.

In contrast, Aries will have no tolerance for their Capricorn companion. They will appear dull and as though they only desire helpful individuals in their lives. This will be attributable to their selfishness and heartlessness.

Related Post  Aries and Libra Compatibility in Relationships and Love

Both of them will be mistaken in a sense, as they must recognize what they could become if the appropriate person or motivation appeared. The issue is that they could remain mired in this useless ego war until they are both so exhausted that they would never consider another relationship again.

How do Aries and Capricorn relate emotionally

In this particular instance, it would be preferable to refer to this paragraph as “understanding” rather than “emotions.” The trouble lies in their initial understanding of one another. At the beginning of a relationship, both parties would likely view the other as someone they could become if they put out sufficient effort. The issue is that nobody here desires change. Despite the implausibility of this initial vision, it is not difficult to associate their emotions with it. Therefore, this is precisely what we would call a lack of understanding, as these two individuals may be madly in love with each other’s false image and madly determined to alter each other.

Although you could easily attribute their troubles to emotional incapacity given their Mars/Saturn nature, their underlying problem is their inability to comprehend and embrace one another. They are frequently too rigid and narrow-minded to recognize that there are features that do not fit within their preconceived bounds.

In general, it is not their shared value system that causes conflicts in their partnership, as they both value autonomy, clarity, and candor. When it comes to serious views about the individuals they are surrounded with, they are generally in agreement. Given that they share some beliefs, their excessive expectations are the source of their conflict.

Related Post  Capricorn and Scorpio Compatibility in Relationships and Love

If Aries admires a person’s capacity to persevere and overcome all conceivable personal obstacles, it does not indicate they are prepared to become this person or have the self-discipline to accomplish so. Similarly, Capricorn may value the speed and concentration of some individuals, but this does not mean they would sacrifice their depth or attention to detail in order to be faster, or neglect their fundamental psychological requirements in order to achieve a goal.

Capricorn does not always get why Aries desires to run at six in the morning. Aries does not see why Capricorn would spend the entire night doing something so dull simply to be thorough when it serves no purpose in this specific situation. What Aries does not get is that assiduity always has worth, just as Capricorn does not comprehend the physical requirement of their body to occasionally relax and act on instinct.

They can readily find hobbies they both enjoy if they involve physical activity. They must both pay attention to their bodies and daily routines, thus it would be beneficial for them to engage in the same physical activity daily at the same time. In this way, they would inspire one another: Aries would increase Capricorn’s vitality, while Capricorn would provide endurance to their joint endeavors. This may do wonders for their relationship, as they would gain a deeper understanding of each other’s natures through this simple action.

This is an extremely challenging combination of indications in terms of sexual compatibility. Mars and Saturn rule Aries and Capricorn, respectively. These planets are regarded as archetypical or karmic foes. Sexuality is primarily represented by Mars, and its conjunction with Saturn can result in a variety of physical and objective difficulties to a healthy sexual life. Saturn exerts excessive pressure on Mars and consumes a great deal of its energy. One or both of them will develop a lack of sexual desire, a shared sense of ineptitude, or even impotence as a result of their relationship.

Related Post  Cancer and Scorpio Compatibility in Relationships and Love

When this type of relationship develops, it is usually the result of a deep unconscious desire to be sexually restrained and constrained. As with all that comes through the sign of Capricorn, an Aries partner could eventually reach a level of equilibrium in which they are sexually fulfilled and their instinctual needs are addressed. Unfortunately, by that time, the Capricorn partner will lack the energy and desire to engage in such sexual activities. This will finally result in their split, as neither of them is light or simple, particularly when it comes to private things.

Due to the unconscious nature of their relationship, they may be incredibly attracted to one another, yet their differences will typically keep them at a safe distance. At their finest, Capricorn will regulate Aries’ passion so that it burns as slowly as possible. Likewise, Aries would view their partner as a teacher and would learn about their body and how to fulfill them. Nonetheless, this equilibrium is incredibly difficult to achieve when these two forceful personalities collide.