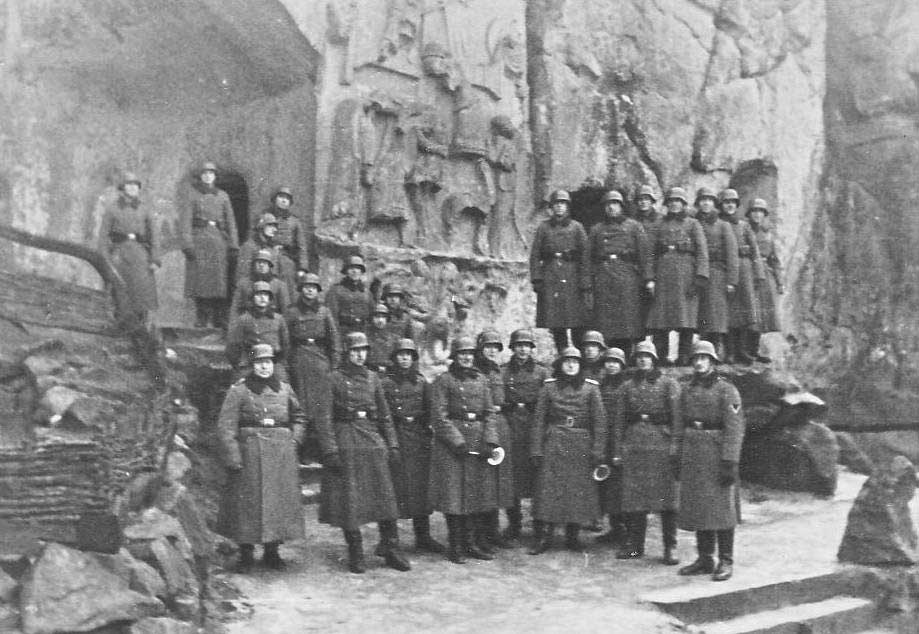 Under Haushofer’s influence, Hitler gave Frederick Hielscher permission in 1935 to set up the Ahnenerbe (Bureau for the Study of Ancestral Heritage), which was led by Colonel Wolfram von Sievers. Hitler told it to study Germanic runes, find out where the swastika came from, and find out where the Aryan race came from, among other things. Tibet looked like the best choice.

Alexander Csoma de Koros, also known as Korosi Csoma Sandor, was a Hungarian scholar who lived from 1784 to 1842. He was obsessed with trying to find out where the Hungarian people came from. He thought that the Hungarian people came from “the land of the Yugurs (Uighurs)” in East Turkistan based on the similarities between Hungarian and Turkic languages (Xinjiang, Sinkiang). He thought that if he could get to Lhasa, he would find clues to where his home was.

The Ural-Altaic family of languages includes Hungarian, Finnish, the Turkic languages, Mongolian, and Manchu. This family is also called the Turanian family, after the Persian word for Turkistan, Turan. From 1909, a group called the Young Turks led a pan-Turkish movement among the Turks. Soon after, in 1910, the Hungarian Turanian Society and, in 1920, the Hungarian Turanian Alliance were formed. Some experts think that Japanese and Korean are also part of the Turanian language family. In Japan, this led to the start of the Turanian National Alliance in 1921 and the Japanese Turanian Society in the early 1930s. Haushofer knew about these movements, which tried to find where the Turanian race came from in Central Asia. It went well with the Thule Society’s search for where the Aryans came from. His interest in Tibetan culture backed up the idea that Tibet was the key to figuring out where the Aryan and Turanian races came from and how to get the vril power that its spiritual leaders had.

The Ahnenerbe wasn’t just interested in Tibet because of Haushofer. Sven Hedin, a Swedish explorer who led trips to Tibet in 1893, 1899–1902, and 1905–1908, as well as a trip to Mongolia in 1927–1930, was a friend of Hielscher’s. Hitler asked him to give the opening speech at the 1936 Berlin Olympics because the Nazis liked him so much. Between 1939 and 1943, Hedin published pro-Nazi books in Sweden and went on many diplomatic missions to Germany.

In 1937, Himmler made the Ahnenerbe an official part of the SS (German: Schutzstaffel, “Protection Squad”) and named Professor Walther Wüst, head of the Sanskrit Department at Ludwig-Maximilians University in Munich, as its new director. The Tibet Institute at the Ahnenerbe was renamed the Sven Hedin Institut für Innerasien und Expeditionen in 1943.

When the Nazis went to Tibet

Ernst Schafer, a German hunter and biologist, went on two trips to Tibet, from 1931 to 1932 and from 1934 to 1936, to hunt and study animals. The Tibetan Government asked him to lead a third expedition in 1938 and 1939, and the Ahnenerbe paid for it. Tibetans were getting back in touch with Japan at the same time as the visit. The Tibetan Government may have sent the invitation because it wanted to keep good relations with the Japanese and their German allies as a counterbalance to the British and Chinese. So, at the Tibetan New Year (Losar) party in Lhasa in 1939, the German expedition was welcomed by the Tibetan government.

In Fest der weissen Schleier: Eine Forscherfahrt durch Tibet nach Lhasa, der heiligen Stadt des Gottkonigtums (1950), Ernst Schafer wrote about his experiences on the expedition. During the celebrations, he said, the Nechung Oracle warned that Tibet should be careful because Germany’s leader is like a dragon, even though the Germans brought sweet gifts and words. The former head of the Tibetan military, Tsarong, who was close to Japan, tried to soften the prediction. He said that the Oracle had told the Regent a lot more, but that he was not allowed to say what it was. The Regent prays every day that there won’t be a war between the British and the Germans, because that would also be terrible for Tibet. Both countries need to realize that all good people have to pray the same way. During the rest of Schafer’s time in Lhasa, he met with the Regent a lot and got along well with him.

Related Post  Is The Story Of The Hollow Earth Real?

The Germans were very interested in making friends with the Tibetans. Their plans were a little different from the Tibetans’, though. Bruno Beger, an anthropologist who was in charge of researching race, was a member of the Schafer expedition. Beger agreed with H. F. K. Günther’s theory that there was a “northern race” in Central Asia and Tibet because they had worked together on a book called Die nordische Rasse bei den Indogermanen Asiens. In 1937, he proposed a research project for Eastern Tibet. With the Schafer expedition, he planned to look into the racial traits of the Tibetan people from a scientific point of view. On the way, Beger stopped in Tibet and Sikkim. There, he measured the skulls of 300 Tibetans and Sikkimese and looked at some of their other body marks and features. He came to the conclusion that the Tibetans were a mix of Mongol and European races, with the European part of their race showing up most strongly in the upper class. Beger suggested that the Tibetans could play a big They could join a pan-Mongol confederation led by Germany and Japan as an ally race. Beger also suggested more research to find out how tall each Tibetan was, but no more trips to Tibet were made.

Several studies done after World War II on Nazism and the occult, such as Trevor Ravenscroft’s The Spear of Destiny (1973), have said that from 1926 to 1943, Germany sent an expedition to Tibet every year because Haushofer and the Thule Society told them to. Their mission was to first find the Aryan ancestors in Shambhala and Agharti, two underground cities hidden beneath the Himalayas, and then to keep in touch with them. There, adepts were in charge of secret occult powers, like vril, and missions asked for their help to use these powers to create an Aryan master race. From what these stories say, Shambhala said no to help, but Agharti said yes. From 1929 on, groups of Tibetans are said to have moved to Germany and set up lodges called the Society of Green Men. Through Haushofer, they were said to have used their occult powers to help the Nazi cause in connection with the Green Dragon Society in Japan. Himmler was interested in these groups of Tibetan-Agharti followers, and he supposedly set up the Ahnenerbe in 1935 because of their ideas.

Himmler did not start the Ahnenerbe. Instead, he added it to the SS in 1937. Ravenscroft’s story also makes other claims that are hard to believe. The main one is that Agharti is said to have helped the Nazis. Ferdinand Ossendowski, a Polish scientist, wrote Beasts, Men, and Gods in 1922. It was about his travels through Mongolia. In it, he wrote about hearing about the land of Agharti, which is buried under the Gobi Desert. In the future, the people who lived there would come up to save the world from disaster. The German version of Ossendowski’s book, called Tiere, Menschen und Gotter, came out in 1923 and was a big hit. But in 1925, Sven Hedin wrote a book called “Ossendowski and the Truth” in which he disproved what the Polish scientist said. He said that Ossendowski had taken the idea of Agharti from Saint-Yves d’Alveidre’s 1886 novel Mission de l’Inde en Europe (Mission of India in Europe) to make his story more interesting to the German public. Since Hedin had a lot of power over the Ahnenerbe, it is unlikely that this bureau would have sent an expedition to find Shambhala and Agharti and then asked them for help.